At the first Tuminds social media workshop I attended, around five years ago, Rene cited Macbeth’s Butchers as an example of a company that used social media effectively.  Fast forward to the present day and this is very much still the case.  Macbeth’s focus their efforts on Facebook and Twitter, with active, engaging pages, and the personality behind the business comes across through the tone of their posts.  Scrolling through their feeds it is clear that they know their audience well and have a formula that works, with a high level of engagement.

The reason I have picked Macbeth’s to focus on this month, however, is because they are creating topical content to increase reach and traffic to their site.  They have a knack for connecting with what is currently being talked about on social media (or, as I have seen it referred to, ‘right-time marketing’).  The timely event which they are currently using extremely effectively to increase engagement is Burns Night.

To promote their haggis in the run up to Burns Night, Macbeth’s created a haggis hunting video with ChitChat PR, which has gone viral since it was uploaded to their Facebook page.  In less than 24 hours after the video was first shared, it was viewed over 80,000 times, and at the time of writing this post the video has had over 97,000 views, with 122 comments and 631 likes.  That’s an incredible amount of engagement and it is increasing all the time.

The fun video is a brilliant, unique way to get people talking and interacting with their page – and, of course, promote their haggis in the run up to Burns Night.  With so much content on the internet it is something a bit different that stands out from the social media crowd.  And because they posted it directly to Facebook (as more and more businesses are doing) they were able to create a call to action at the end of the video with a link directly to their online shop.

Prior to uploading the video, they posted a photo of Jock Gibson, director of Macbeth’s and chief Haggis Hunter, taken during the filming of the video and told fans all would be revealed shortly.  Building intrigue is another good way to engage fans, with some trying to guess what he was up to.

At the beginning of the month Macbeth’s also took the opportunity to promote their black pudding whilst it was in the news after being given superfood status, even offering a special discount on all black pudding sales this month.  They also posted about it more than once on both channels, which is a great way to reach more of your audience.  The content was edited each time, for both Facebook and Twitter, so that it was not just the same post over and over (the repetition of news bulletins throughout the day is the most frequent example of the reasoning behind this).  Macbeth’s shared posts about the superfood status five times on Facebook between 7th and 9th January, at different times of the day, with an edited message each time, to make sure that as many people as possible saw the link to their blog. 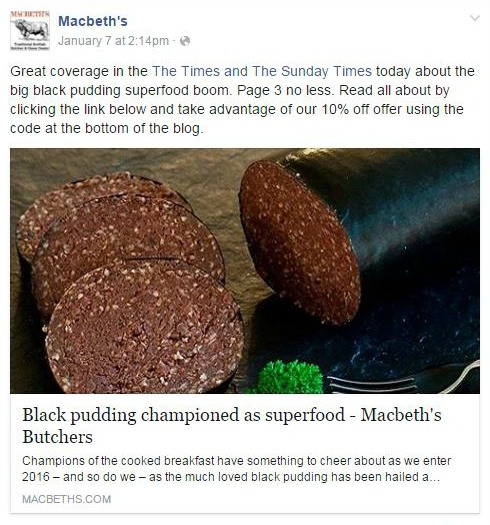 Rene’s advice five years ago is as true today as it was then – if you’re searching for ideas on how to use social media for your business, take a look at Macbeth’s.

At the time of writing this post I was unaware that Macbeth’s work with Forres-based PR and marketing company ChitChat PR, who obviously live up to their name of getting people talking!