How the Press Use Social Media

One of the perks of working at Tuminds is getting to travel around the North of Scotland to meet interesting businesses and people who want to listen to me geek out about Social Media.

Last Friday was one of those days. Together with our office manager, Fiona, we set off in the morning for Elgin’s Eight Acres Hotel to meet up with editors, journalists and sales representatives who work for the Scottish Provincial Press. Our talk on how the media can use social media was part of a wider day of digital training for SPP, and it was an absolute delight to be invited along to talk about how news consumption has changed from print to digital.

It’s quite obvious that we, those human beings who are connected to the internet, have changed not only the way we find out about the news, but also how we want to be kept informed. In the last five years, I can’t really remember a time when I bought a newspaper; local or national (the same applies to magazines). However, this certainly doesn’t mean I am in a news black hole, in fact I am a very politically engaged person (my other geeky passion). It’s just that I don’t read from tangible, paper and ink, 3D newspapers any more. I much prefer to read my news on my smartphone or tablet, pretty much for these five reasons:

In the UK we spend an average of 4 hours on the internet (I have to admit I am not the norm and probably spend at least 3 times more than that). 2 Hours of our time is spent accessing the internet from our mobiles. Just over 2 hours of our internet time is spent on Social Media – that’s half the total time we spend on the internet! By comparison, the average person now only watches 3 hours of TV a day. (source: http://wearesocial.net/) 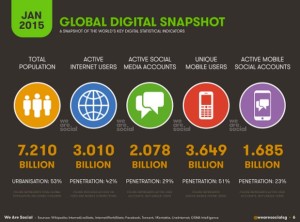 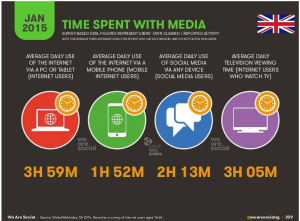 In the last year we have seen major shifts in the social media landscape. Facebook continues to dominate with around 1.3 billion active accounts and Twitter is increasingly engaging more and more people.  However, Instagram has been luring people from both platforms with their clean, simplistic and visual social network. Things change fast on social media, and as we spend more time engaged online, we will continue to see these affiliations to social networks change.

How about Journalists then?

Having kept an eye on how the media has responded to the internet and the rise of digital technologies and social media, it’s not been a smooth transition. And I think a lot of papers are still trying to figure it out.

However, on the whole, more and more journalists are seeing the benefits of using social media for their job, for improving their productivity, for connecting with news stories, leads, sources and possible advertisers. A Global Social Journalist Study, which included the USA, UK, Germany, Finland, Sweden and Australia, reported that more than half of journalists say they would be unable to do their jobs without social media now.

A great example of a newspaper who gets it is The Independent. Brandwatch named The Independent ‘the best performing newspaper’ on Social Media in the UK this year, and their stats speak for themselves.

What I like most about The Independent is that they curate the content they share across their social networks. Their Facebook page leads with the top global stories, local and more human stories (because that’s what a more local, regional or national audience want to see on Facebook). On Twitter they post pretty much all their content (because that’s what you can do on Twitter for a global audience). And on LinkedIn they share news stories for the business sector (because that’s where business professionals are and they don’t really want to have their feeds filled with showbiz news).

The shift from print to digital is pretty astounding. The chart below highlights just how staggering the size of audiences for print and digital are, but also how different types of papers command different audiences. So while the big three printed papers might be The Sun, The Daily Mail and The Metro, with a combined circulation of just under 5 million, they command a social audience of 1.76 million on Twitter and 5.28 million on Facebook – which brings us into the region of around 7 million likes and followers to these three titles. That might look good on the face of it, but let’s compare: 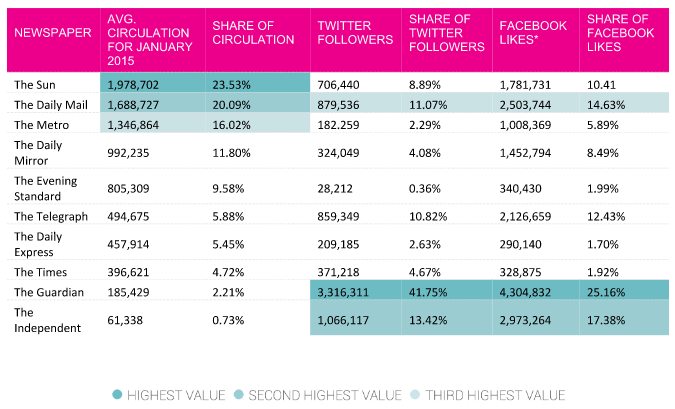 Brandwatch The Shift From Print to Social

The Sun, The Daily Mail and The Metro take up nearly 59% of the total print circulation of newspapers in this chart. The Guardian and The Independent have a combined circulation of 246,000 (just 3% of circulation share). However, and this is a big however, both newspapers command a staggering social audience. Between them they have around 55% of the share of Twitter users (4.36 million Twitter followers) and 42% of Facebook audiences (7.2 million people).

So while the big three might sell more papers, The Guardian and The Independent far outstrip their collective social presence with an online audience of around 11.5 million people.

Mashable – how I love thee

I’m a big fan of Mashable for two reasons. Firstly, it is a really good site for news and opinion, it’s a lovely designed site and has an excellent app which I use almost on a daily basis. Secondly, it was set up by a guy from Banchory, in Aberdeenshire at age 19 from his bedroom, and as a result, is one of the most influential people on social media in the world.

He did this from his bedroom; he was not a journalist or a media professional. He saw an opportunity, he took it and it certainly paid off.

Take-Away’s for the Press Industry

As I said at the top of this post, on Friday I spoke to a group of journalists, editors and advertising execs from the Scottish Provincial Press about the value of social media, its benefits and why they should be using it more for themselves and their newspaper titles. When it comes down to it, here are the main takeaway’s I hope our delegates walked away with:

Thanks to these fantastic companies for providing such useful facts and stats:

Social Media for the Press in 2015 from Sian-Tuminds