Instead of talking amongst friends, neighbours and work colleagues about the biggest news stories going on in the world, we now take to social media to share our opinions and to be informed of the latest live updates.

A perfect example of this is ‘Storm Jonas’ that swept across the East coast of America this past weekend. New York City in particular was one of the worst affected areas with over 30 inches of snowfall in under 24 hours, making it one of the top three snowstorms in the city’s history. Saturday alone was the snowiest single day ever for NYC, resulting in a state of emergency being declared, a non-emergency road travel ban being put in place from 2.30pm on Saturday afternoon to 7am on Sunday morning, and Mayor de Blasio calling on all businesses to close down until the storm had passed.

The city was in shutdown mode and when one of the biggest and most powerful cities in the world goes into shutdown, people want to talk about it and find out as much as they can. Storm Jonas, as it has been named, made waves not only on international news channels, but also on social media. Several hashtags have been trending including #StormJonas, #Snowmaggedon2016, #Snowzilla and #Blizzard2016, with many sharing their own personal experience of the storm in some way. My personal experience was thankfully a very enjoyable one where I ploughed my way through knee-high snow in beautiful Central Park – it was a day I won’t forget in a hurry and of course I had to share it with the world!

However, not everyone was affected by the storm in such a positive way and social media was used by the emergency services to relay critical information to people about road conditions, the road travel ban in Manhattan, subway, train line and airport updates, which areas in particular to avoid, and general guidelines for staying safe and warm.

#ICYMI: For your safety & ours, roads are closed in NYC except for emergency vehicles. #Blizzard2016 pic.twitter.com/7UInP8pcMj

Companies were active in using social media to tell their customers whether they were open or closed or when their last appointments/classes would be held, depending on the nature of their business.

Let it snow, we’ll still FLY ?❄️? our Center City and all NYC studios are open, and check our site for the latest: https://t.co/kd1R4ZIVpG

Media outlets reported on a vast range of storm-related stories; some echoed the messages of the emergency services and reported on how many fatalities, road accidents and tows there had been (before the Manhattan travel road ban was put in place there had been 3 deaths from shovelling snow and 18 deaths in total, 343 tows and 312 accidents). News departments were also continually providing live updates of the storm’s activity and the weather conditions to expect as the storm made it’s way along the coast. These types of messages needed to reach people instantly and using social media was the most effective tool in achieving that. When events of this nature happen, people often now look past the TV or radio and go to their social channels for the most up-to-date information.

On the other hand, media outlets were also reporting on all of the fun that comes with snow – 30 inches of snow! This included several videos that went viral on Facebook; did anyone see the panda who was having the most fun out of anyone?

Tian Tian woke up this morning to a lot of snow…and he was pretty excited about it. #Blizzard2016

Snapchat in particular proved to be very popular for the general public sharing their own Storm Jonas experience. The social platform created a local story called Snowzilla 2016 which anyone from the East Coast could add to, and in addition to this there were fun and quirky “weather report” themed filters that people could use with their snaps. 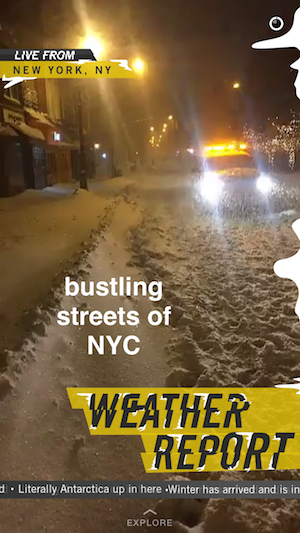 Whether you were checking hashtags on Twitter and Instagram, searching for the media and emergency services’ live updates, scrolling through videos on Facebook or swiping through Snapchat stories, social media allowed for people all around the world to gain a very realistic, sometimes scary and often entertaining look into the eye of #StormJonas.